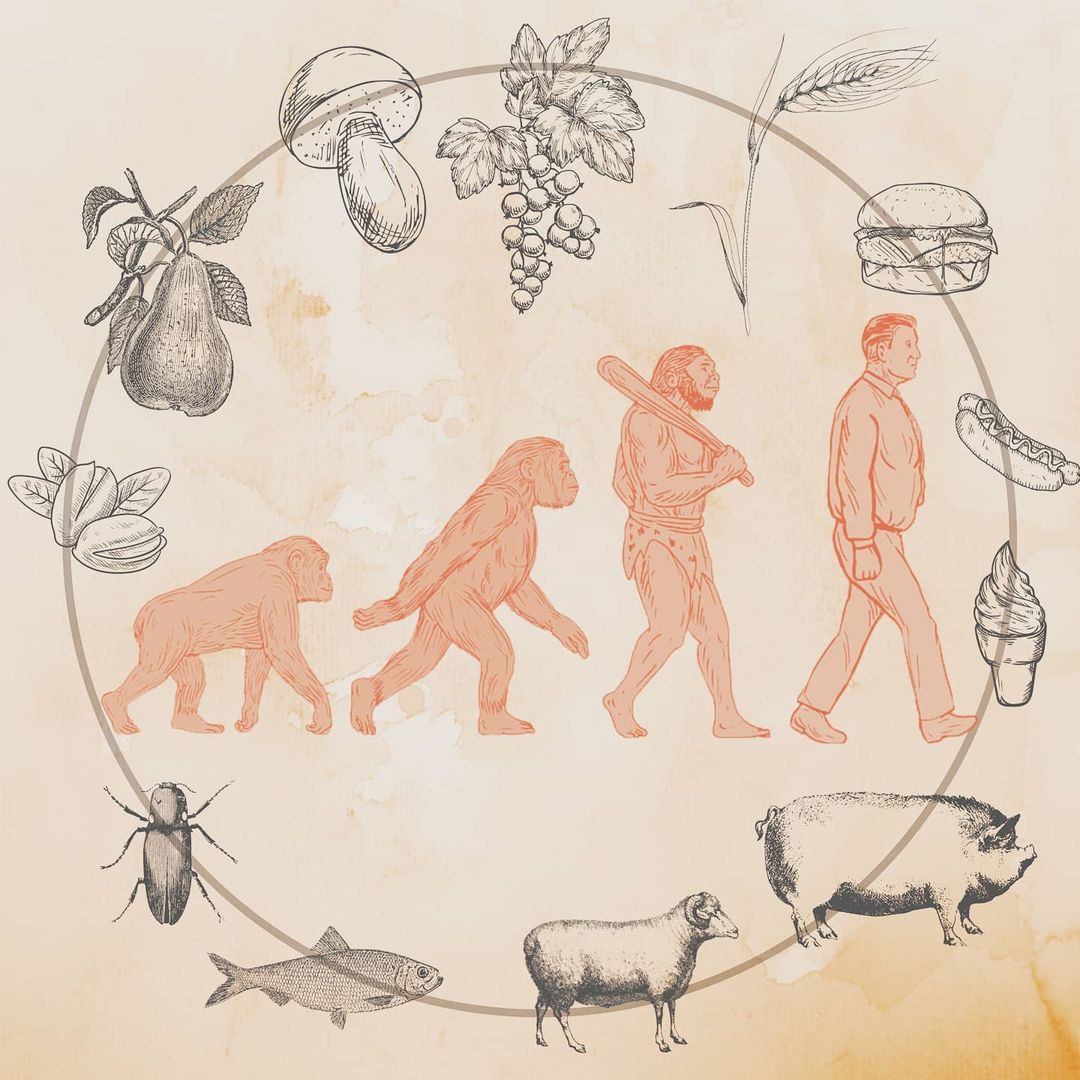 The foods we eat today are far from what we consumed for millions of years if we count our Homo non-sapiens ancestors too. In this article, I aim to shed light on how and why that has changed and the implications of this change.

My intention isn’t to say one way is better or to persuade you towards any side. The point is to show how each stage has changed the course of humanity and to propose that even if it doesn’t look like it, things are actually moving in a significantly better direction.

The early humans lived in small tribes and scavenged most of their food. Occasionally they caught prey and feasted on meat, but in large part, their diet consisted mainly of nuts, berries, roots, insects, edible herbs, and mushrooms. They were, as the name states, hunter-gatherers.

It was the time of nutrient abundance. Our ancestors received copious amounts of vitamins, minerals, and medicinal compounds from a wide variety of different foods. A typical hunter-gatherer may have eaten 300+ different types of foods in one week.

It was also the time of calorie poverty. While the foods we ate provided plenty of micro-nutrients, they often were poor in macronutrients (carbohydrates, proteins, and fats). Inventing fire helped in this regard, as cooking food made macronutrients more digestible to our bodies. But in the grand scheme of things, a well-fed hunter-gatherer probably had much fewer calories than a hungry modern-day city dweller.

The first significant update to the millennia-old tradition of hunter-gathering was horticulture. Horticulture was small-scale farming by nomadic cultures turned into semi-sedentary and sedentary cultures. Horticultural farming was done by hand, and it wasn’t organized (compared to agriculture). Many horticultural societies were still hunting and gathering, and small harvests were complementing existing food gathering practices.

An illustration of an ancient horticulture society. Photo credit: Gizmodo

It is essential to understand that this is how we have fed ourselves since the first homo sapiens stepped on Earth and most likely for millions of years before that. This is how our bodies have evolved to utilize food — nutrient-rich and calorie-poor — from a great variety of natural resources.

Once we discovered the plow and realized that we could train an ox to drag that plow on a grass field, the development kicked in, and humans were on their way to conquer the world.

The first known agricultural societies formed in the Fertile Crescent area (not so fertile anymore) in the Middle-East. As far as we know, that is where the first complex societies sprang up. Sumerians, Egyptians, and Akkadians inhabited the area at different times, cultivated crops, and built complex societies until there was nothing more than deserts left. Interestingly enough, the same -desertification- has happened in many areas where humans have sunk their plows into the dirt. It happened in ancient China (1), ancient South America (2), early 20th century US (3) and it’s still happening in many parts today. Fertile lands are turned into farmland before waning into dead soil and finally transforming into a desert.

Another significant difference between hunter-gatherers and agrarian societies was, counterintuitively, time management. Hunter-gatherers spent 15–40 hours per week (5) to survive (a.k.a. Foraging, hunting, and preparing food), and the remaining time was spent on leisure. An average farmer had to pull long working days in agricultural societies, and leisure was a luxury most couldn’t afford. Not only the farmer but also the entire family had to work on fields day-in-day-out.

The decision to hop on the agriculture bandwagon and trade leisure for hard work has been one of the primary reasons for the modern advancements we got today; complex hierarchies, politics, commerce, and centralized religions. Even information technology and astrophysics can give kudos to the agricultural revolution because there wouldn’t have been the potentiality for the industrial revolution or the information revolution without it.

Agriculture enabled us to support larger populations, specialized in various professions such as architects, mathematicians, politicians, soldiers, priests, and farmers. But it also made the same people less healthy, as the entire population was reliant on a single crop, which usually lacked one or more essential nutrients. Also, natural disasters and pests could wipe out the harvest of a village, city, or even an entire state, making the population fragile against external conditions.

The agricultural revolution changed our diet from hundreds of different types of plants, mushrooms, and animals to only a few plants and animals. The top 10 most-produced foods globally in 2013accounted for 72% of all foods produced in that year. And two of them were sugar crops (6).

In a nutshell, we got the calories for fuel but were short of nutrients for building blocks.

Today a lot of food products produced are junk. They are filled with chemicals and materials that even our grandparents wouldn’t consider food. Many of those fillers, such as ubiquitous monosodium glutamate (MSG), are known to be toxic for human consumption (7). But if they are toxic, why is the industry using them, you may ask?

The answer is simple. In mass production, producers need to streamline their production by using fewer perishable ingredients and more additives to increase their products’ shelf-life. Because the products don’t contain fresh, natural ingredients with real flavors, the manufacturers also need to add flavor-enhancers so that we people want to consume them. We have traded real ingredients, nutrients, and flavors for convenience.

The multinational corporations producing most of the foods found in grocery stores are not in the business of selling you real wholesome food but in maximizing profits for their shareholders.

The raw ingredients that are farmed for packaged foods are also produced on a massive scale. The single-crop farms are fragile to pests and weeds, which is why farmers need to use toxic weed-killers and pesticides such as glyphosate and chlorpyrifos to make sure that nature is not affecting their harvest (9, 10). These toxins aren’t harmful only to humans but also to the environment, especially to the soil, which our very lives are dependent on (11). The UN has estimated that there are 60 harvests left on Earth before the soil is too barren to feed the Planet (12). That is if we don’t upgrade our practices.

The meat we eat is most often produced in cruel conditions where the animals suffer from the first day of birth to the last day of slaughter (13). It is the holocaust of animals that happens every single day all over the world. The current meat production is severely unethical, creates massive amounts of CO2, and creates poor-quality products (14, 15). Also, 36 percent of the world’s crop calories are used for animal feed, instead of letting the animals graze on pasture which is their natural food (16).

We justify all this because we don’t understand the side-effects of our current model of food production. And how could we? All we can see is the beautifully designed packages on the grocery store isles, and no one is telling us the truth behind those products. If we do know this, then the justification is usually that “we need to produce food in this way to feed our growing population.” It’s true that we need to feed people but aren’t there better ways to do it?

I reckon, yes. Regenerative agriculture is a fantastic example (17). It’s an agriculture method that regenerates soil rather than destroys it; permaculture has some similarities, but it is considered smaller in scale (18). With technological advancements, we can create new ways of producing food and tracking sustainable productivity. Good examples are vertical farming (19) and Solar Foods, which makes “food out of thin air,” as they put it.

I believe that in the past few decades, we have been in the dark age of food production, but we are now about to enter the golden age.

Regenerative agriculture is sweeping in the farming communities, and that creates plenty of hope for all of us. If you haven’t seen the Netflix documentary Kiss the Ground, I highly recommend watching it. For an inspiring example of how one couple changed the dead soil of an old farm in California to a garden of Eden, check out The Biggest Little Farm. It’s truly a beautiful and concrete example of what we can do in a matter of a few years. Once we learn new creative ways to observe nature and implement technology to assist us, even the sky’s not the limit for our capabilities.

In the bright future, we don’t need genetically modified crops because the homeostatic nature of future farms produce enough food and keep the pest out by natural design. Some industries (think. a pesticide and weed-killer manufacturers) will no doubt go out of business, but new and better ones will sprout and help us become a more resilient and antifragile society.

It’s not only that we don’t need industrial farming to sustain the population of the Planet. We will do a much better job with new and more sustainable practices. They have already shown much better results than the old “legacy” industry using chemicals and monoculture practices. It’s only a matter of willingness to make the metamorphosis happen.

I firmly believe that we will learn to work together with nature in the coming years and include the latest technology to create more nutritious and sustainable food products than ever before. And all this will happen without compromising our values with other beings, from the smallest bacteria in the soil to our animal friends who make sure that the cycle is completed and life regenerated.

Sign up now to my Elevate 360 Newsletter to get my carefully curated insights into personal and professional life optimisation. Sign up now
We use cookies on our website to give you the most relevant experience by remembering your preferences and repeat visits. By clicking “Accept”, you consent to the use of ALL the cookies.
Cookie settingsACCEPT
Manage consent

This website uses cookies to improve your experience while you navigate through the website. Out of these, the cookies that are categorized as necessary are stored on your browser as they are essential for the working of basic functionalities of the website. We also use third-party cookies that help us analyze and understand how you use this website. These cookies will be stored in your browser only with your consent. You also have the option to opt-out of these cookies. But opting out of some of these cookies may affect your browsing experience.
Necessary Always Enabled
Necessary cookies are absolutely essential for the website to function properly. These cookies ensure basic functionalities and security features of the website, anonymously.
Functional
Functional cookies help to perform certain functionalities like sharing the content of the website on social media platforms, collect feedbacks, and other third-party features.
Performance
Performance cookies are used to understand and analyze the key performance indexes of the website which helps in delivering a better user experience for the visitors.
Analytics
Analytical cookies are used to understand how visitors interact with the website. These cookies help provide information on metrics the number of visitors, bounce rate, traffic source, etc.
Advertisement
Advertisement cookies are used to provide visitors with relevant ads and marketing campaigns. These cookies track visitors across websites and collect information to provide customized ads.
Others
Other uncategorized cookies are those that are being analyzed and have not been classified into a category as yet.
SAVE & ACCEPT
Elevate 360

Your monthly dose of personal and professional life optimisation

Sign up now to sustainably upgrade and elevate your performance!

Does all the conflicting information on what foods to buy confuse you? I hear you – this Ebook is meant for you!

Download this Free shopping Ebook today to get guidance on Primal Food choices!

How to breathe well & why it matters to start now!

Plus get Charlène Gisèle weekly updates.

GET EXCITED ABOUT YOUR INBOX AGAIN

GET EXCITED ABOUT YOUR INBOX AGAIN